The default model binder or DataAnnotationsModelBinder in ASP.NET MVC works well for simple data structures that basically map properties directly to form elements, but it quickly breaks down in a real world application. Take this simple scenario: 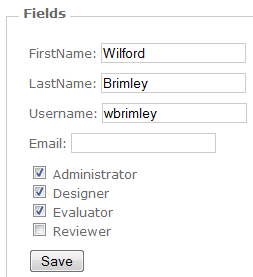 The built-in model binder can handle the easy fields like FirstName, LastName, and Email, but it doesn’t know how to deal with the Roles. This is where the custom model binder comes in:

And it gets wired-up in the Global.asax like this:

Because UserModelBinder is a decorator, it preserves the base functionality (like validation) of the default binder and only adds the part about mapping the roles. This is good stuff because it keeps construction of the model out of the controller. That’s the Single-Responsibility Principle in action.

The two functions AddRoles, and GetRoles are an example of command query separation (CQS). It would be easy to combine those two functions together and in fact that’s how it looked at first. So why bother separating them? Well it doesn’t really matter in this simple case, but it’s like how I tell my 3 year-old son to move his milk cup away from the edge of the table. I figure it’s a good habit that will prevent a few spills in the long run. The idea with CQS is there is a natural seam between finding objects and doing stuff with them. I buy that. I expect GetRoles to be more volatile than AddRoles or at least change for different reasons.